Scroll down to read entries.

The Sun Sets On The Saws

I've long known that trees with particular genetics produce the best walnut for stock blanks. Not any old walnut tree will do; not at ACRS.

The soils and climate of certain areas also influence the end quality of the wood greatly. This ought to be considered when looking for trees to mill. Size, maturity, growth habit, disease and damage must also be assessed. Sadly, I've met very few people who knew anything worthwhile about this business. I've seen a lot of walnut trees milled by others that weren't worth milling, and a large number of good walnut trees completely wasted by poor milling and processing. A miller and/or blank cutter who really knows the job as it applies to producing gunstock blanks is vital. Without all those aspects thoroughly taken care of, the finest and most stable blanks just cannot be had with any reliability. Crew worth feeding, and who are mad enough to work with you, are essential during most of the work. Such folk are much harder to find than the best walnut trees, but I got very lucky there most of the time.

In the below photo, yet another run of milled walnut trees have been carefully racked out for short-term storage before the slabs are cut into blanks. The storage conditions, timing of cutting the slabs into blanks, and treatment thereafter are critical to the stability and working quality of those blanks. The process I carefully and laboriously refined was begat from a single goal - to achieve the best possible blanks from a stockers perspective, across all grades.

Looking at it hard, there is not much I could realistically do to improve blank quality to any degree. I always cut for quality, not quantity and looked towards perfection, not profit. The reward for me has been the realisation that my own blanks equal the stability and workability of the very best "outside" blanks I ever worked - consistently and reliably. Such blanks have always been very difficult to buy. For me, the sea of lesser blanks from myriad suppliers are now in the past. I simply won't risk investment in time and effort on blanks that I know, from experience, might well give me grief.

That means more time for family, gun work, and hunting.

The Martini Cadet is a popular and classic rifle, much revered in Australia. I recently completed a new stock pattern for the Cadet, which is shown above. It's hard to get a true perspective of scale from the photograph, but when combined with a matching forend it's a good basis for a relatively simple and sleek re-stock. To date, fans of Martini Cadets who have seen it in person have been sporting big smiles.

The new pattern features a straight hand, and this allows the use of the standard factory lever, and it's original "catch plate" and screws. The new ACRS straight-hand stock is about as easy as a cadet re-stock can get and is much easier than doing a neat job of a pistol-grip lever conversion. A stock cut from this pattern has a Length Of Pull of 14 5/16", which can be cut down/changed to suit. The problem of standard cadet stocks being far too short for many adults can thus be solved.

The comb height and drop at heel is a sensible compromise, considering this is not a bespoke stock made to individual fit requirements.  The toe line of the stock is set by the position of a standard un-modified lever and it's catch plate, when the lever is closed. Without bending the lever to a lower (or higher) position when closed, that is.  The height of the comb will suit most shooters using iron sights quite well. In the case of a rifle being fitted with a low-mounted scope, the comb height will still be okay for most shooters, too - but not ideal. There is no cast at toe or heel on this pattern, provided the stock is installed squarely to the receiver socket, and the socket was machined squarely in the first place. The butt is ambidextrous. If interested, please enquire about left and right-handed cheek piece versions, with a bit of cast.

I also made a couple of new forend patterns, longer than normal at 9.375" OAL and with a schnabel forend tip. They are relatively slender. One is inlet for a Sportco Cadet, the other for the factory .310 barrel. These can be cut shorter and finished in a more traditional fashion if desired. I also offer other forend styles for cadet rifles and there will likely be one suitable for most customers.

Fitting is required - these are not a drop-in proposition. Socket dimensions vary somewhat. Catch plate dimensions and draft angles vary slightly, too. The catch plate used for the pattern was (by a small margin) the smallest and most symmetrical I could find. Because dimensions vary I do not generally cut the catch plate draft angle on the inlet (minimum dimension). This allows for hand fitting of the parts with scant gaps (most probably nil gaps if done well). With the socket nose of the butt scraped-in squarely and the draw-bolt tight, the catch plate can be aligned and it's position marked, then final inletting of the plate can be undertaken. This must be done with care, to allow for a slight interference fit on the lever, such that it snaps home with light resistance yet be positively retained. There will be minor variations in the position of the lever catch itself, they are not all bent the same. If you inlet the catch plate slightly too far to the front or rear, or have a "rogue lever", they are easily bent into correct alignment. I'm sure the factories did the same, as a matter of course, during fitting. Timing screws is a learned art, which applies to the catch plate. I don't offer new screws at this stage, but would consider supplying them.

As well as the straight-hand pattern, I made a new American Classic pattern for the cadet. A lot of work.

Without completion of a significant amount of all aspects of the work, including the machining of stocks from multiple patterns they have made, forming opinions about patterns and duplication based on everything other than long experience doing the actual work, is pretty shaky!

In the past, I have made in-house entirely, or made significant contributions to the design, development, manufacture, repair and adjustment of patterns for other makers. The work is very time consuming and many of the jobs have been quite testing. I've learned a lot from it on multiple levels and my skills have been significantly extended after thousands of hours doing such. It's hard be too fussy getting a pattern "spot-on".  Good materials are also vital. One of the fascinating aspects is that there seems to be no end to the opportunities to further learning and improvement in this work.

The stocks duplicated by me in the below galleries date to a little before ACRS was formed, but are a good example of significant co-development of a pattern for another maker, one I'd previously completed a fair bit of work for.

The scope and specifications of this job grew as the makers project ideas evolved. Making one pattern turned into two; one duplicating job turned into three creating a lot of extra work. The second pattern I'd sent to the maker for glass bedding and outside shape tweaks was returned with a bedding job that was askew, and a several new problems with outside (a)symmetry. Some visible, others hidden to most eyes. Some were just minor cosmetic issues easily sorted when finishing the duplicated stock. Other flaws were vital to the "accuracy outcome" of the machine job, which now made the pattern unsuitable for duplication to my standards. Frustrating, but nothing new when dealing with anyone who hasn't actually undertaken my end of the work. By this stage, the job had stretched me far beyond my schedule and rate of pay, but in order for a good job to be done I had to rectify these issues.

It's important to identify such problems and correct them as is necessary, or they will affect the quality of the duplicated stock. It takes experience backed up by decent metrology skills and equipment to identify and correct important issues. I'll note that when errors appear in a duplicated stock, most people assume it to be the fault of the duplicator operator, rather than an unstable "outside" blank, patterns being mussed-up, and/or less than decent fitting/bedding skills. Some makers adopt a sensible approach to correcting such flaws happily, working towards a common goal of getting the job done as well as possible, together. Some have personalities that get in the way of that outcome.

I was asked to supply the blanks for these jobs. Very fine, ultra-lightweight blanks went into these Remington 40X BR stocks. The first copy would be machined from a one piece blank. The second two would feature laminated forend "wings" to get the blank wide enough to cut the stock from.

Featherweight blanks that are relatively fine-pored and comparatively firm in texture are not easy to find. They are rarities, and I had a lot of time and effort invested in these blanks. The investment was worth it - they machined like a dream, and were wonderfully stable. To machine them into a stock duplicated from anything but a decent pattern would be a great shame. 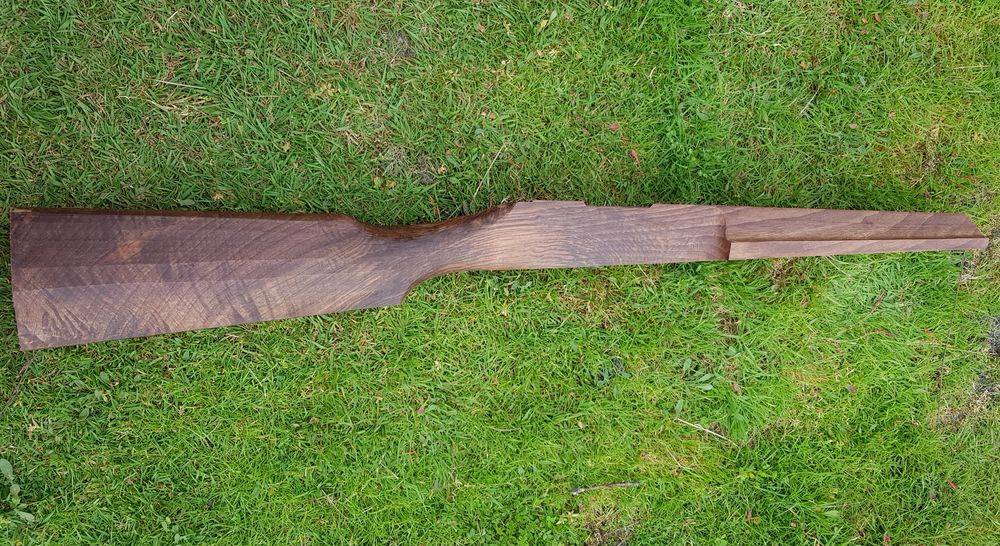 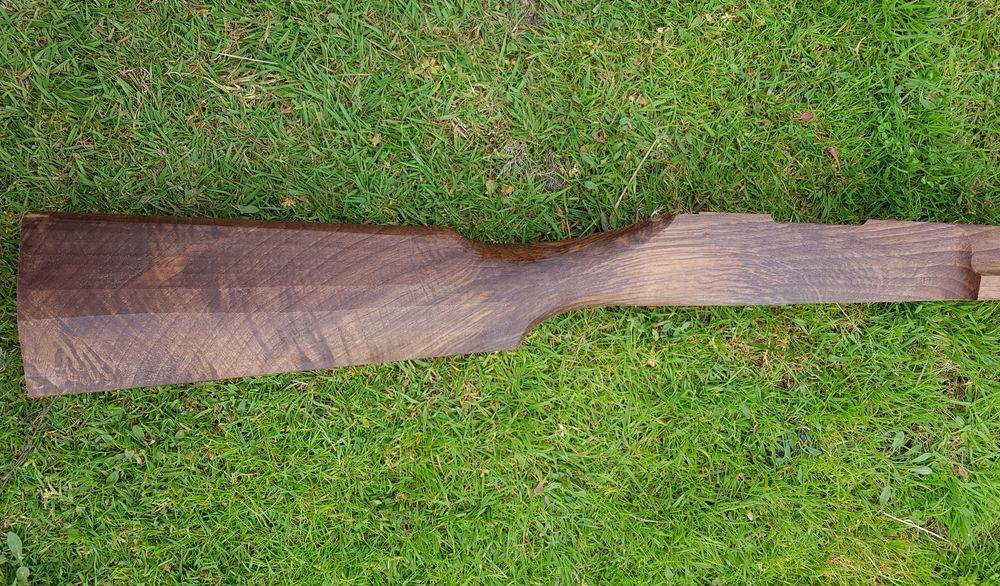 As the above gallery shows, machined stocks can look pretty plain in the dry, "as-machined" state. A coat of turps gives a better indication of what can be had from them if the finish work is up to snuff. The intense fiddle-back and boldly contrasting colours of orange, deep honey and jet black are much more striking in person. Tricky walnut to finish, without causing the colour contrast and figure to be unduly subdued, but nothing that a good stock maker cannot handle with relative ease.

The following gallery shows two more duplicates machined after I laminated the extra-wide forend "wings". Finding the wood to do so was not easy. To be honest, I blew so much time and effort on the jobs that I only had time to arrange for photos showing the last two stocks with only dry walnut. It's hard to see the nice figure and contrast in both stocks, but they were beauties. The stocks are shown straight off the duplicator. No filing up, sanding etc to make them presentable - just a good clean machine job, in good stable walnut. An ideal start to a custom stock job, and easy as it gets from here methinks. 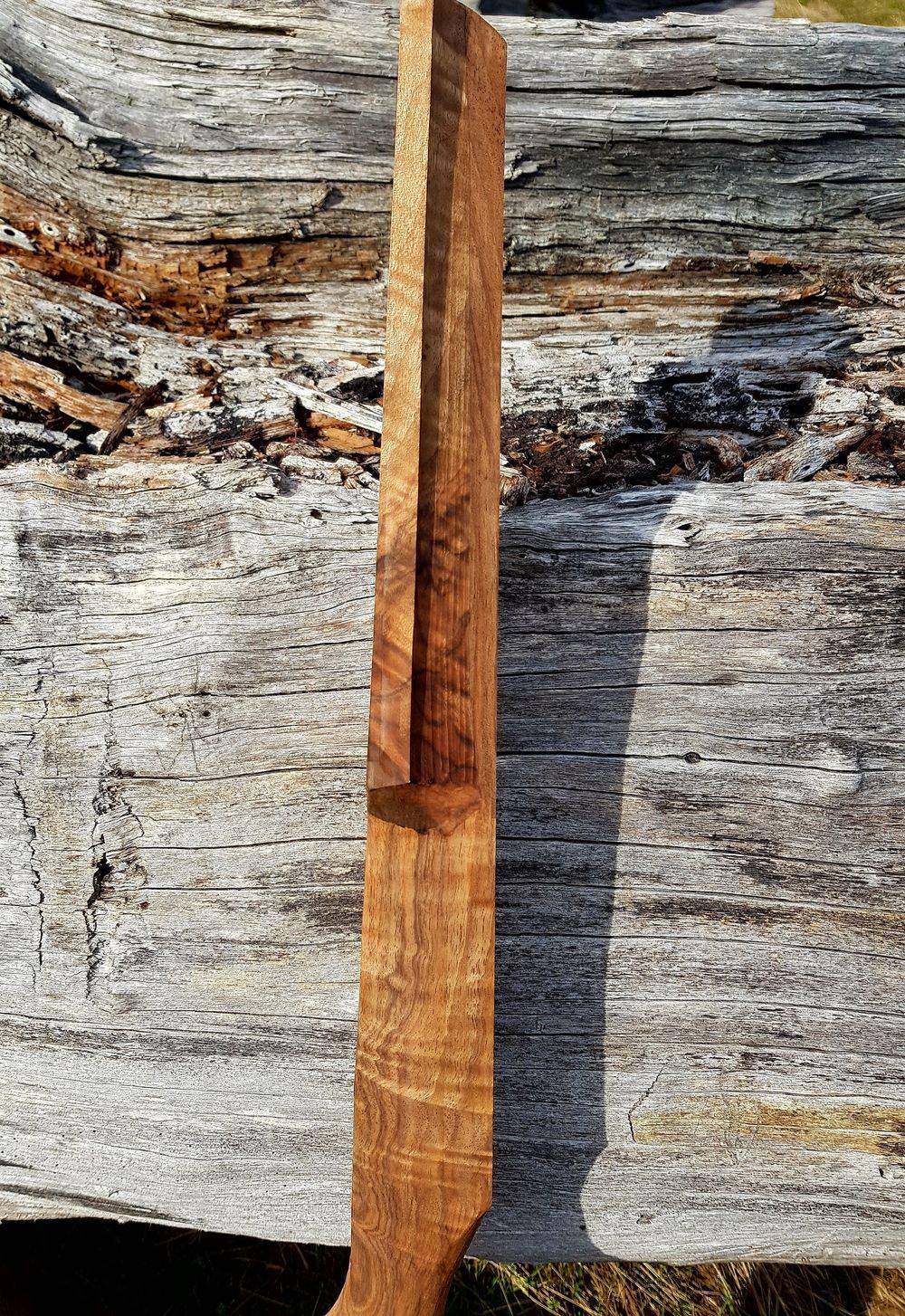 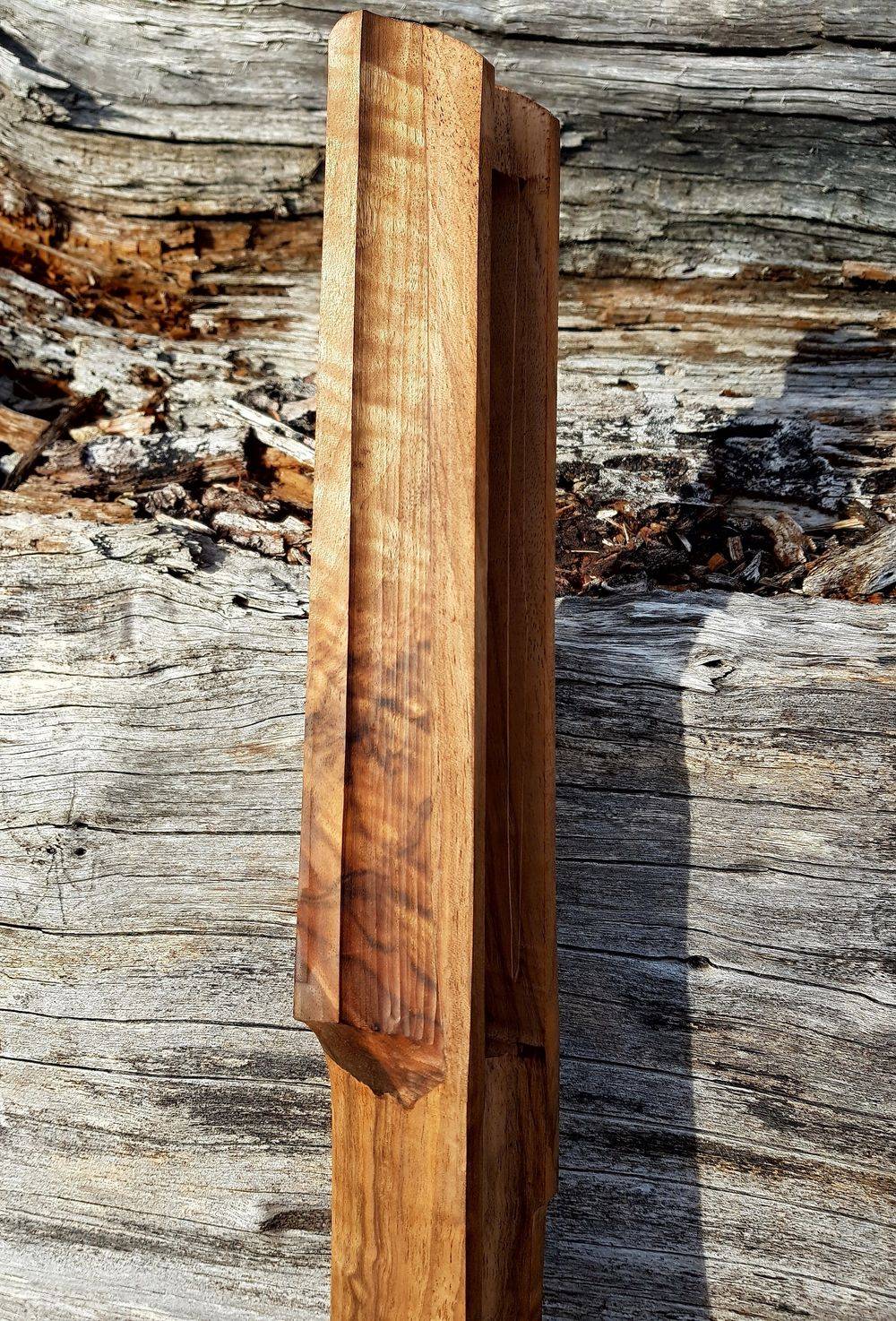 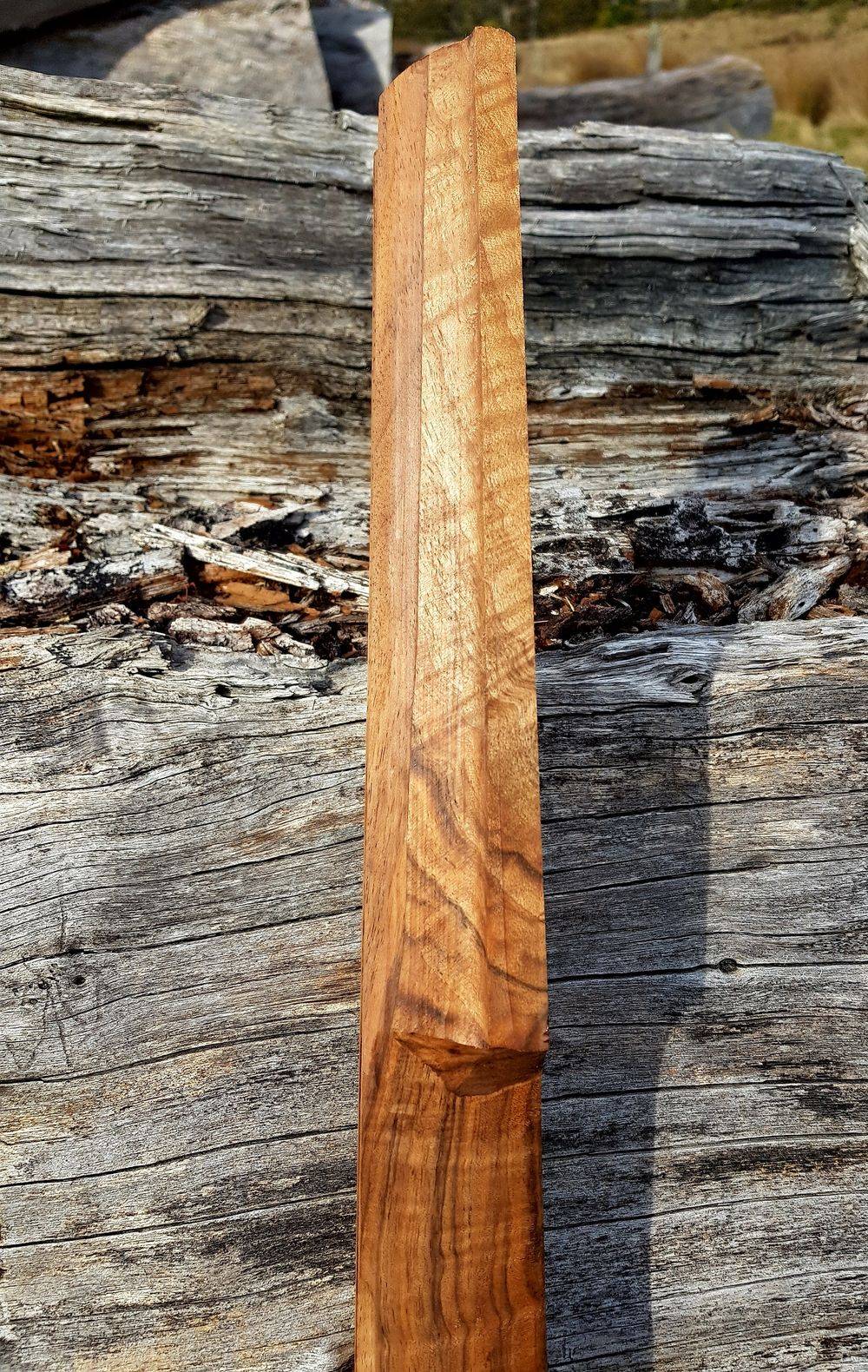 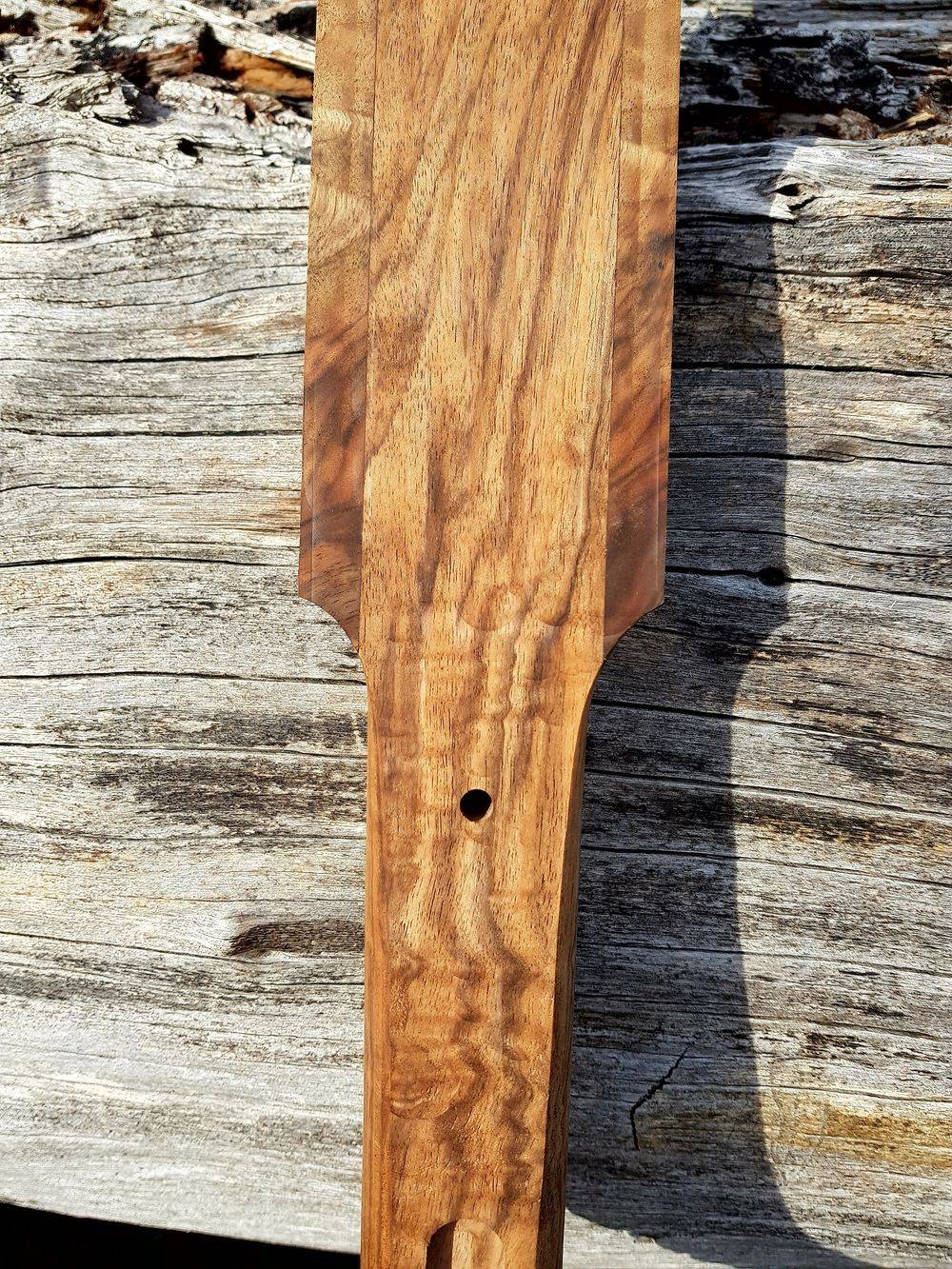 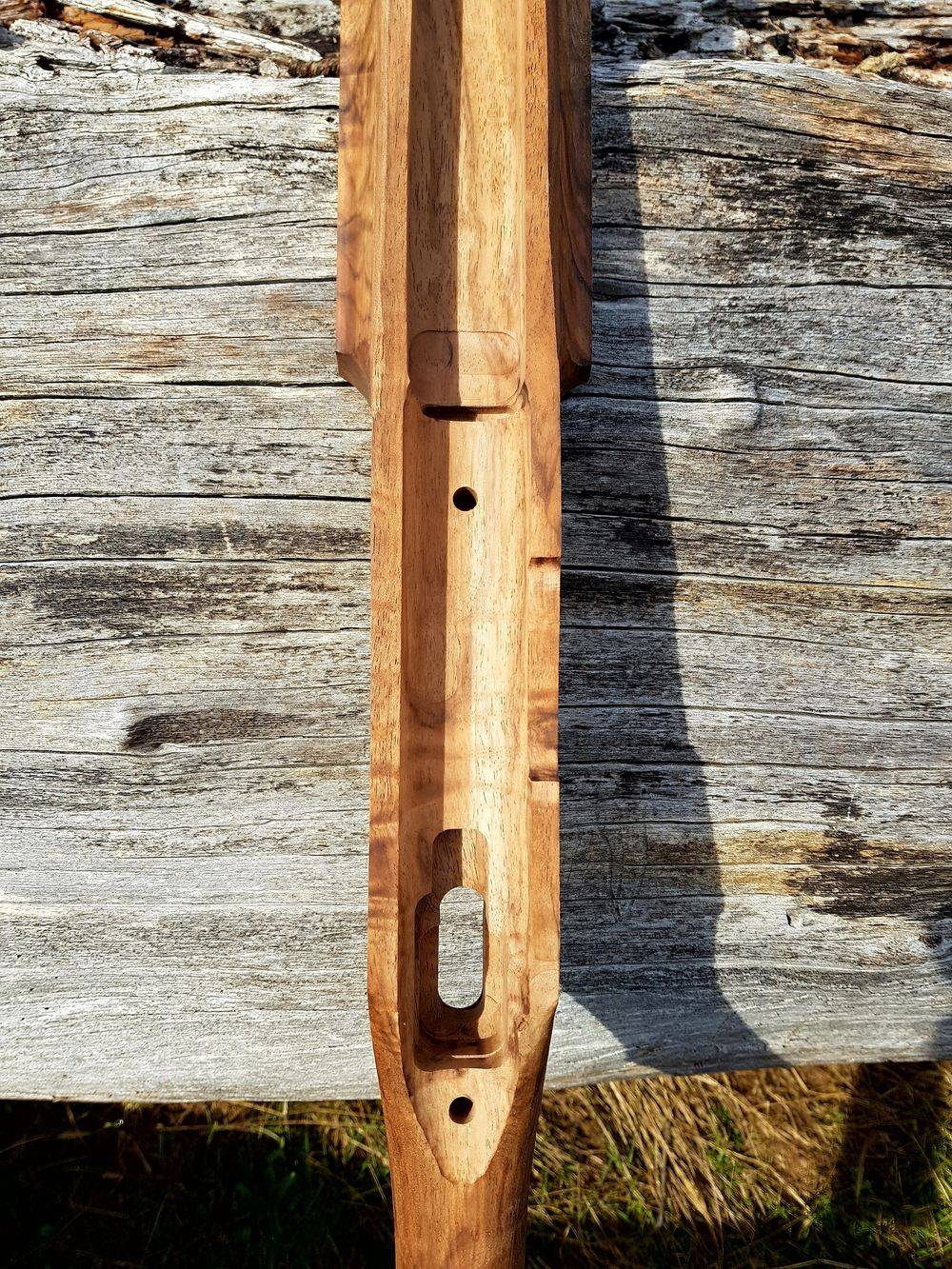